Anil has more than 20 years of experience in drug discovery and translational clinical development, as well as in broader public health research innovation R&D. More recently, he served as Director of CSIR-Institute of Microbial Technology (CSIR-IMTECH), one of India’s premier biomedical laboratories, part of the Government of India.  He also currently serves as Vice president and head of Global Public Health Discovery research at Janssen (J&J).

Previously, Anil played a key role in discovery of Bedaquiline – the first novel drug to be discovered for the treatment of multidrug-resistant TB for 45 years. Bedaquiline has been conditionally approved for use in over 64 countries including the US, Europe and high burden countries such as India, China and South Africa. The World Health Organization has put Bedaquiline on its list of ‘Essential Medicines’.

Anil received his PhD from the Max Planck Institute for Biochemistry, Germany and IGIB, Delhi University in 2001.  He has several publications in leading journals and holds more than 20 patents to his credit.  He serves on Scientific Advisory Board of Council of Scientific and Industrial Research (CSIR), Government of India. In 2020, he was awarded by Heroes of chemistry award for discovery of Bedaquiline by American Chemical Society (ACS 2020).

TB is one of the leading causes of death globally, accounting for 1.4 million deaths in 2019.  It is estimated that there are still around 10 million people falling ill with TB each year.  While TB is a curable disease, its unique pathogenesis requires prolonged treatment with a number of antimycobacterial agents, that can preclude treatment compliance.  Added to this, drug resistance in Mycobacterium tuberculosis is an alarming concern, with around a 10% increase in MDR or rifampicin resistant TB reported year on year.

The Koul Research Group has been set up to investigate vulnerabilities in mycobacterial metabolism, building on the success of Bedaquiline to benefit global public health in combating TB.  With the discovery of new targets, it is hoped the treatment of TB can be revolutionized, shortening therapy and allaying resistance, to help achieve the WHO target of eradicating the TB epidemic in the next decade.

Over the years, Anil’s research has led to the discovery of Bedaquiline, a drug which over 300,000 patients have received to date.  This discovery highlighted bacterial energy metabolism as a source for novel drug targets in the treatment of tuberculosis (Nature Communications, 2014). g.

Anil’s current TB research focus is to have a better understanding of bacterial energy metabolism pathways that can help us find efficacious, safe and accessible drugs that can shorten treatment for TB.

Anil and his laboratory is also interested in the emerging drug resistance in bacteria. Anil is also looking at potential new strategies targeting serious Gram-negative infections and efflux-based drug resistance.

Apart from research in TB, Anil is also interested in respiratory viruses as demonstrated by his discovery efforts in the fight against SARS-CoV-2. Anil initially worked on the Respiratory Syncytial Virus (RSV) that causes childhood bronchiolitis. Anil's research on RSV targeted the way these viruses enter human cells. The team’s research has led to the identification of molecules that could obstruct the entry of RSV (Nature chemical biology, 2016; Nature communications, 2017). One candidate is being evaluated in trials. Anil continues his research interest in virus-host interaction mechanisms. 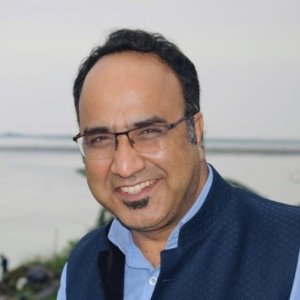