David completed his PhD in 1988 at the University of Hull on the molecular biology of the intestinal parasite Giardia lamblia. He then moved to the London School of Hygiene & Tropical Medicine to work on the sexual stages of the malaria parasite Plasmodium falciparum with Professor Geoff Targett. Current research is focused on investigating signal transduction pathways that regulate development of the most serious human malaria parasite Plasmodium falciparum. David is also involved in drug discovery work to exploit knowledge generated on these pathways to develop new antimalarial drugs.

I am involved in various aspects of teaching the Medical Parasitology and Medical Microbiology Masters courses. I also co-organise the D2 Module 3160 - Molecular Research in Infectious Diseases and I am the Deputy Chair of the Exam Board for the Infectious Diseases Distance Learning Masters module.

David Baker’s research group uses biochemical and genetic approaches to study the cyclic nucleotide signal transduction pathways of malaria parasites. These pathways are centred on the intracellular messenger molecules cAMP and cGMP which perform a whole spectrum of cellular functions in diverse organisms. David's studies have focused on the cyclase enzymes that synthesise cyclic nucleotides, the phosphodiesterases that degrade them, but also on the protein kinases that are activated by cGMP (PKG) and cAMP (PKA). David's group have found that in Plasmodium falciparum cGMP and PKG play an essential role in triggering the activation of mature sexual parasite forms (gametocytes) which are required to transmit disease to the mosquito vector. It is now becoming clear that cGMP signalling and the PKG enzyme are vital for multiple parasite life cycle stages; for example using specific PKG inhibitors in conjunction with inhibitor-insensitive transgenic parasites, David's team in collaboration with Mike Blackman at the Francis Crick Institute, have demonstrated that asexual blood stage egress is blocked if PKG is inhibited or conditionally disrupted. This collaboration has also recently demonstrated an essential role of cAMP and PKA signalling for erythrocyte invasion by P. falciparum merozoites. Through collaboration with Mathieu Brochet at the University of Geneva, David has shown that PKG activity stimulates calcium release required for merozoite egress and that this is likely mediated through regulation of phosphoinositide metablism. More recently we have shown that PKG interacts with a transporter-like protein (ICM1) that is vital for coordination of cGMP and calcium signalling. David is also targeting cyclic nucleotide signalling pathways through development of novel antimalarial drug candidates. This workis being funded primarily through two Wellcome Trust Innovator Awards in partnership with Salvensis and the Medicines for Malaria Venture (MMV).

David received two Wellcome Trust Investigator Awards in 2015 and 2021. These joint awards, with Professor Mike Blackman at the Francis Crick Institute, focus on the role of cyclic nucleotide signalling in malaria parasites.

David served on the MRC Infections and Immunity Board from 2018-2022. 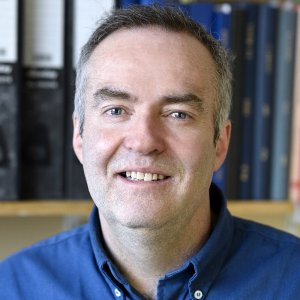