Boiling slowly: My story of a violent relationship 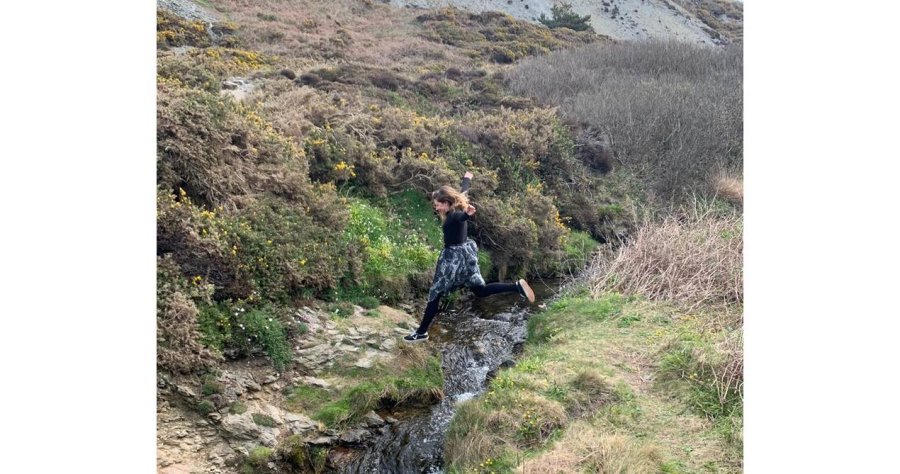 TRIGGER WARNING: This blog contains information about gender violence and self-harm which may be triggering to survivors.

When I remember it now, it’s like looking back at another person, a different life.

It was the UK election day, December 2019, 11 am. Before the world got turned upside down by the pandemic. I’m sitting in the hallway of my flat, blood dripping down from my head onto my hands and floor, with smashed glass all around me. Completely in shock, unable to move, a kind of carnal and uncontrolled wailing coming from my mouth while tears splashed and intermingled with the pooling blood.

And here’s the kicker. I’d done it to myself. Smashed myself round the head with a glass lamp. It was the lowest point of my life.

Fast forward two hours, and I’m in a therapy appointment. She asks a simple question.

“But why your head?”

It took me a year to answer. And that tiny question is the reason I am fundraising today.

A four-year journey of unravelling

You’ve heard the story. Chuck a frog in a boiling pot of water, and it jumps out immediately. Slowly warm the water, and the frog stays inside, lulled into a false sense of security until it boils to death.

There’s no specific incident I can draw on as ‘this awful thing that happened’ – perhaps that might have made me leave. No, instead, I slowly unravelled. Death by 1000 papercuts. Bit by bit, I lost my sense of self.

My opinions were laughed at. Any intellectual debate was shut down angrily as me being ‘unreasonable’, ‘unsupportive’, ‘anti-him’. Compromise was out of the question, ‘you know you won’t like the answer – why do you keep causing arguments like this?’. Punishments were put in place for ‘bad’ behaviours. He kept a tally of good and bad things that happened to him each day – if I did something ‘bad’ it was added as a tally, and he would recount how many days he’d lost that year because of something I’d done wrong.

Over time, my confidence began to shatter. My friends and family could see the danger. Whenever I’d see them, puffy-faced from a night of crying, I’d tell them, ‘it was my fault because I did X, Y, and Z’. Until ultimately, I avoided seeing them because I didn’t want them to hate him. I told lies to mutual friends – made up elaborations and fabrications where I’d done something awful, which explained and pardoned something aggressive he’d done. It got me excluded from some of those groups. And then he’d tell me I was ‘unwelcome’ because of my reputation, and everyone was tired of my drama. I then stopped my hobbies with those people. I was paranoid and unreliable, with him feeding that insatiable, insecure part of my brain with my worst fears. I’d spend my nights inside crying and isolated while he was out having fun with a woman I was insecure about. Then I’d run to the door like an excited puppy when he’d get back – grateful that he loved me.

I’d like to say that I walked away. But I really was a wretched creature by the end – a starved animal just looking for any kind of love or kindness, and believing I wasn’t worthy of it. He was the one who left. Cue the lamp moment and rock bottom in my life.

In positive news, since being away from him, my mental health has steadily improved. I did three rounds of therapy, had to overcome PTSD-esque panic attacks, and built a whole new life. But for more than a year now, I haven’t needed any psychiatric help (I’m sure my GP is missing our regular chats). I’ve come off medication entirely; I am genuinely happy and have a healthy balanced life.

The conclusion being that I was never sick. I was addicted to a toxic man, and the addiction nearly killed me.

Why did I stay? Because I thought I was madly in love. I believed that love was about pain and sacrifice and this great epic story of overcoming hurdles. I was wrong.

Damage from the start

Recently, I’ve begun to wonder– why would I think love was any different? I’m from a generation who grew up with strong female protagonists who sacrificed everything for love, who had epic romances with dangerous men, who managed to turn the ‘bad guy’ good. Let’s break down some of the novels and TV shows I’ve been exposed to – and were my favourites growing up.

Beauty and the Beast

Clever, brave, outspoken woman gets taken hostage by a cruel man with inner demons. He imprisons her and threatens her. But because she perseveres, she wins her Prince Charming and lives happily ever after.

The most physically powerful woman on the planet. Saves the world on a regular basis. Falls in love with a man who wants to kill her and spends an entire series emotionally torturing her and threatening her family. But it’s an epic romance.

Eye roll. You get where this is going. Handsome, rich, older man falls in love with vulnerable young woman. Plays hard to get, stalks her, controls her behaviour, isolates her from her friends and ultimately kills her. That Edward was a real catch…

Give me another one – Pride and Prejudice, American Pie, Saved by the Bell, Friends, Romeo and Juliet, Pokemon, The Little Mermaid -  I could go on all day about how gender norms are damaging in each of them.

The point is (and it’s not restricted to TV shows, think ‘Barbie’) these norms are learned from a very young age. Young girls and boys learn how to interact from the moment they are born. Films and toys may seem harmless, but that then escalates as we get older. Young girls being called bossy for having an opinion, teenagers being wolf-whistled at, young women being groped, women tolerating misogynistic slurs in the workplace and so on. Sadly, underlying most of this is a perception that ‘she must have done something to deserve it’.

My story is just one example from the millions of women worldwide who’ve experienced violence, whether that be harassment, physical assault, sexual assault, or emotional assault. Violence against women is a pandemic.

And sometimes, when I browse through Instagram and see BBC News has three separate stories where a woman has been murdered or attacked, I feel helpless. How can we possibly tackle this? How can things ever really change? How can we undo millennia of damage? I descend into a dark cave in my mind.

Revolutions for the future

I’ve spent two years recovering from my addiction via the rehab clinic many call ‘lockdown’, during which time I have become better acquainted with the amazing researchers at the London School of Hygiene &Tropical Medicine. My job at the School enabled me to work on stories with powerful women working in gender violence and health. They taught me about the pandemic of violence, they explained the cycles of behaviours and societal structures that perpetuate violence. I read about fascinating studies they’re conducting within schools to help boys express their emotions better, to help young girls have more empowerment, to end period poverty so menstruation doesn’t block education. I read about initiatives involving sex workers as part of the research methodology, ensuring study participants were treated with dignity and respect.

It’s harrowing but hopeful. There are solutions.

I now believe that if I have children, they will grow up in a world where dating the ‘bad guy’ isn’t a rite of passage. I hope that soon, no girls will have to miss out on education because they’re having their period. I trust that women will be able to dance the night away and walk home without fear. And I know that women will no longer be silenced – the roar has started, and it’s only going to get louder.

But all of this relies on research funding. We need robust evidence and tried-and-tested solutions to influence strategies on the ground but also change governmental policies. We need policies on a country-by-country basis that can work with societal laws and boundaries. And who better to do that than a large, collaborative, global health organisation?

More personally for me, because even though they were working flat out during a pandemic, many of the scientists working for the Gender Violence and Health Centre took time to be kind to me and talk to me about their research – it made the world of difference.

So back to the question: ‘Why your head?’

I hit myself in the head because I hated that I couldn’t behave. I hated that I was terrified and weak and worthless. I hated that I didn’t understand what was happening. I hated that I spent all the time feeling insane but not knowing why I was insane. Except… I wasn’t ‘crazy’. And no amount of lamp-smashing was going to silence the inner-warrior in my head that fought back against the oppression. Now that rebellious, outspoken, intelligent part of me is growing in power.

I finally have the strength and courage to speak out. I want to be an advocate for change through sharing my story but also by fundraising for research. The biggest obstacle I’ve overcome is the one in my brain. But that doesn’t really draw in the donations – so my physical representation of this is three MASSIVE obstacle runs next May. Over the course of three weeks, I will run 45 miles and tackle just under 300 obstacles. You can support me – and women worldwide - by donating to the cause.