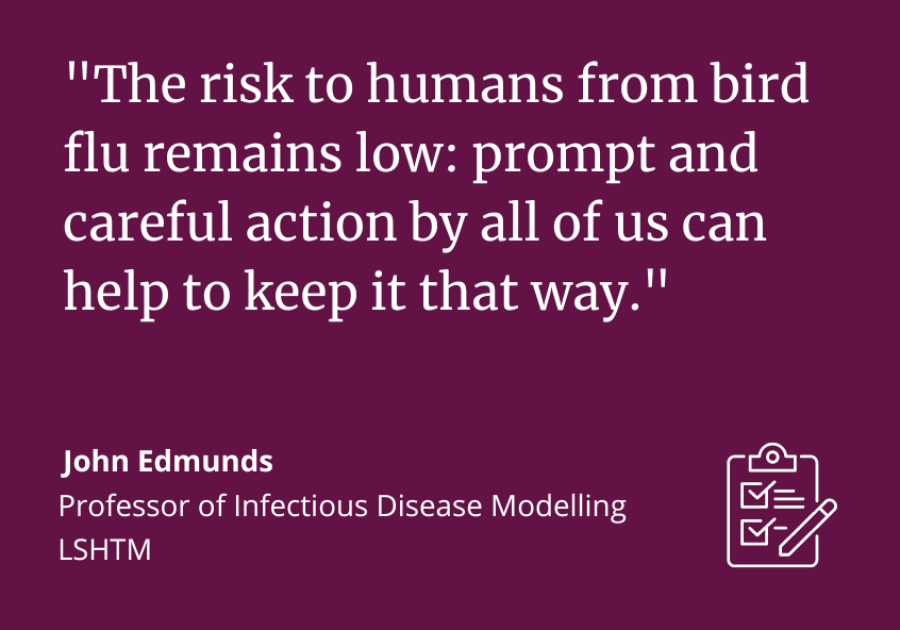 As the world grapples with one of the largest recorded outbreaks of bird flu (H5N1 avian influenza) concerns have been raised in the media about the potential risks to human health and whether this is the next pandemic we should be preparing for.

“One of the curious effects of the COVID-19 pandemic is that it seems to have taken our attention away from other infectious disease threats. There is an ongoing outbreak of Ebola Sudan virus in Uganda at the moment that most people are completely unaware of and at home we have been suffering from a major outbreak of H5N1 avian influenza (bird flu) for over a year now. Indeed, this strain of H5N1 is spreading globally affecting domestic and wild birds across much of the Northern Hemisphere.

“It is highly pathogenic and very transmissible amongst birds. There are many instances of die-offs in commercial flocks and nesting colonies which has led to strict measures being put in place to try to reduce its spread. These include culling of affected commercial flocks, the imposition of “protection zones” around affected premises and an order to ensure that all domestic birds are housed indoors (your free-range turkey this Christmas will have been restricted to strutting round its barn). Even with these measures, H5N1 has continued to spread. Indeed, the frequency of outbreaks is increasing, with 126 confirmed cases in England since the start of this October out of a total of 259 cases since the outbreak began in October 2021. With each case resulting in the slaughter of affected flocks, millions of birds have been culled so far. The impact on farmers and the poultry industry has been devasting.

“So, what are the risks to humans? At present they seem to be very low. There have only been two documented human infections with this strain of H5N1 – one here in the UK and one in the US. Crucially, there are no known cases of human-to-human transmission. The virus seems to lack the ability to infect us efficiently. Whilst this is undoubtably good news, there is no room for complacency. Influenza viruses mutate and evolve rapidly and the more this virus spreads the greater the chances that it can acquire the ability to infect humans. This could be as a result of a reassortment event where a person (or perhaps another mammal, such as a pig) is infected by H5N1 and another strain of flu simultaneously. An event such as this led to the last influenza pandemic in 2009. So, it is critical to take precautions to avoid being infected. These mostly affect poultry and veterinary workers or those with backyard flocks, but the rest of us should also be mindful of the risks. Do not touch dead or sick wild birds and report any suspect cases immediately. The risk to humans remains low: prompt and careful action by all of us can help to keep it that way.”

“The importance of good biosecurity and avoidance of contact with sick or dead birds and poultry and live bird markets where there are outbreaks of “bird 'flu” is underlined by the findings of LSHTM researchers with public health colleagues at the Institute of Epidemiology, Disease Control and Research, Bangladesh. Combined vet and medical teams examining crow deaths in 2017 at live bird poultry markets noted workers there were exposed to aerosolised viable avian influenza A viruses.

“Other recent work has also highlighted moderate year round transmission of avian influenza in poultry in live bird markets. Although there were different timings in peaks of viral activity compared to seasonal influenza in humans, there is still the risk of influenza viral reassortment leading to possible pandemic influenza strains, adding to the evidence supporting the urgent need for large scale improvements in live animal markets.”