23 August 2021 London School of Hygiene & Tropical Medicine London School of Hygiene & Tropical Medicine https://lshtm.ac.uk/themes/custom/lshtm/images/lshtm-logo-black.png
Ed Patrick (MSc Medical Parasitology, 2007) works as a Doctor and Anaesthetist in the UK National Health Service and is also a comedian. He has recently published a book sharing his experiences as an anaesthetist. In this blog, he shares his memories from LSHTM, the inspiration behind the book and how COVID-19 affected his role. 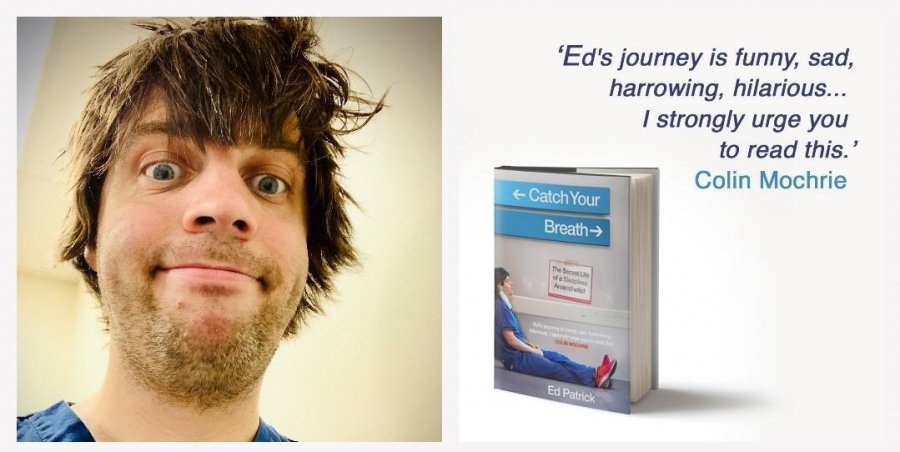 "I graduated from LSHTM in 2007 and my standout memory is the smell of the lab. Also, the insects, worms and bugs and my project in China, which was looking through faeces (that was fun) for parasites and the brilliant teaching. It was also the place where I first thought about becoming a doctor.

"My biggest achievement since graduating is that I became a doctor. And I have a dog now.

"I’m also a comedian. I have done shows across the UK and at the Edinburgh Festival. I’ve released a few podcasts, one called Comedians’ Surgery where I interview famous comedians about their health stories and experiences, it is funny and informative. This was optioned by Hat Trick Productions and made into a show for BBC Radio 2 in 2020 called Infectious Personalities.

"I have now published a book, Catch your breath: The secret life of a sleepless anaesthetist. I have always written down memories and ideas, and I wrote a lot more during the pandemic, which is how the book idea came to fruition. Anaesthetics is a fascinating field of medicine, one which the public doesn’t really know much about. To work in it is also fascinating and the journey has provided some very funny moments.

"During COVID-19, anaesthetists were slammed. As doctors with airway skills we were needed in the intensive care unit. I missed doing anaesthetics, I still had exams and job interviews to prepare for. I, as did all comedians, also lost all my live comedy work.

"In the future, I hope to complete anaesthetics training, write more, and get a second dog."