26 October 2020 London School of Hygiene & Tropical Medicine London School of Hygiene & Tropical Medicine https://lshtm.ac.uk/themes/custom/lshtm/images/lshtm-logo-black.png
Iya Saidou Conde (MSc Control of Infectious Diseases, 2020) works as a Polio Consultant within the Afro Polio Rapid Response Team, which is supported by Bill and Melinda Gates Foundation. To celebrate Black History Month, we asked him about his role, what this month means to him and some quick-fire questions! 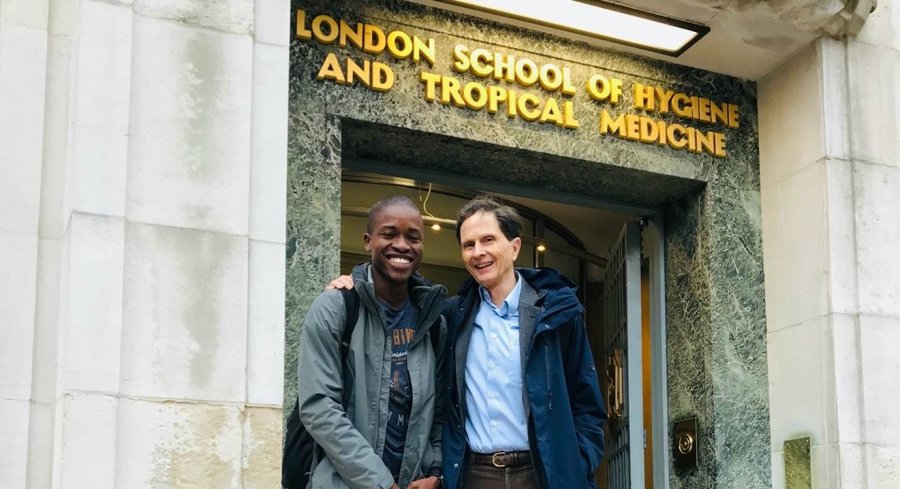 October is Black History Month in the UK, an annual observance that celebrates and reflects on Black history, arts and culture, as well as recognising the achievements and roles of Black people in shaping history. LSHTM is committed to fostering a supportive, enabling and inclusive environment, where all individuals are treated with dignity and respect, and where there is equality of opportunity for all regardless of characteristics or background.

What is your role and what does it involve?

As a Field Epidemiologist/Polio Consultant in the Afro Rapid Response Team, my role is to provide in-country support at national, provincial and district levels in terms of disease surveillance – mainly Acute Flaccid Paralysis (AFP) surveillance, responding to polio outbreaks and providing technical support for the introduction of any new vaccine such as the novel oral polio vaccine type 2 (nOPV2).

Where are you based?

I am based in Brazzaville, the capital of the Republic of Congo.

How long have you worked there (and what was your previous job)?

I have been here since August 2020. Prior to this and upon completion of my MSc in CID, I have been consulting with the Bill and Melinda Gates Foundation (BMGF) on the assessment of their support of the polio community-based surveillance in Africa. This multi-country assessment took me to Cameroon, Chad and the Democratic Republic of the Congo (DRC) evaluating five NGOs. Upon submission of my assessment reports and as a public health physician locked down in DRC, I was asked by the BMGF to support the WHO COVID-19 response team in Kinshasa. I provided technical support to the Gombe (a commune in Kinshasa) COVID-19 response team including case investigation, contact tracing and data management before joining the RRT in Brazzaville.

What is a typical day for you?

My day starts with responding to e-mails, then disease surveillance site visits and conducting supportive or formative supervisions to local health officers.

Tell us about a project you are currently working on?

On a personal basis, and in collaboration with other LSHTM alumni, I am working on a mentorship scheme that aims to promote research among final year medical and nursing students in sub-Saharan Africa.

What is your favourite thing about working there?

My favourite thing is having an in-depth understanding of other health systems and meeting different communities.

Can you tell us the most unusual thing you’ve done at the organisation?

I was the first international consultant to collect GPS coordinates of an AFP using Open Data Kit in a remote village in my assignment area.

What is your proudest career achievement?

My proudest career achievement is getting an exciting job immediately after my MSc that took me across several African countries, exactly what I wanted to do. Another exciting thing is meeting and learning from different communities while bringing them joy with my daily services.

I am from Guinea.

What does Black History Month mean to you?

This is a month that contributes to the promotion of black heritage and acknowledgement of black people’s achievements.

What three words would you use to describe Black History Month?

Who is your biggest inspiration?

My influential role model is Ngozi Erondu, a PhD graduate and former lecturer at LSHTM, and the first person who encouraged and guided me through my LSHTM and Chevening scholarship applications.

What did you want to be when you were growing up?

I wanted to be a Medical Doctor, which did happen. For this, I’m so grateful to my parents and especially to the free educational system in Guinea, though it has numerous challenges.

What three words would you use to describe yourself?

What is your favourite book?

The Bottom Billion by Paul Collier.

What is your most treasured possession?

My family and friends.

What is your favourite joke?

My favourite joke is “Mind Your Language” an old British sitcom where a language teacher, Jeremy Brown, tries to make a living by teaching English to immigrants from India, France, China, Japan, Spain, Italy and many other countries. His lessons do not always go as planned. Though it was aired before I was even born and I only came across it when I was preparing my English language test (IELTS), I became so attached to it that I often watched it after a stressful day. To me, in addition to the fun, it also illustrates how one’s culture or accent could be assimilated into British culture, unlike many others.

What is your favourite place?

My favourite place is Dalaba, a prefecture in Guinea, precisely in the Fouta Djalon.

What is something that surprised you?

I did not know that in the West, speaking to someone without looking at the person could be interpreted as being disrespectful, which is totally the opposite in my culture.