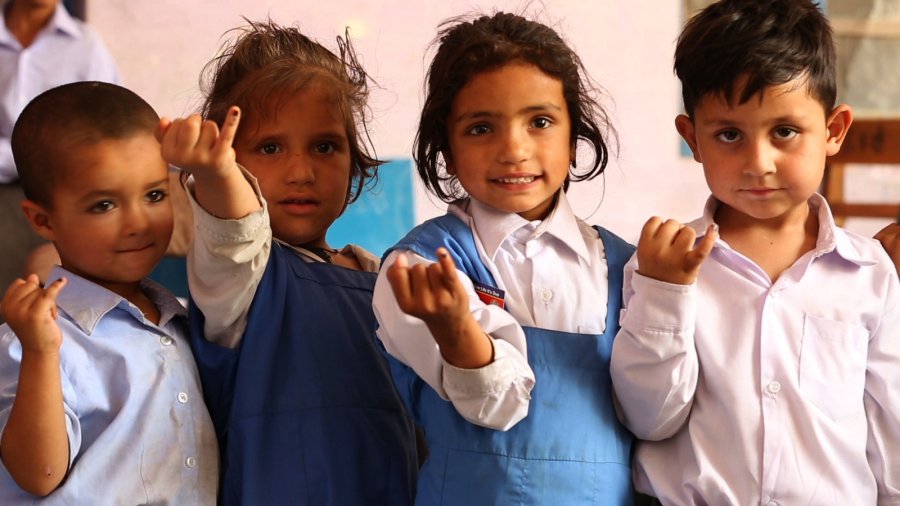 One of the great vaccine success stories of the 20th Century is the success of the vaccine against polio. However, while significant progress has been made, the ambition to eradicate polio has still not been realised and there are emerging challenges facing the global eradication programme.

To mark World Polio Day 2019 on the 24th of October we asked a number of experts at the LSHTM with experience working on polio to answer a few questions about their work, what 2019 means for polio eradication and what we can learn from the work so far.

Professor of Communicable Disease Epidemiology at LSHTM. Since 1997 he has worked on a range of vaccine issues including the evaluation of non-specific effects of vaccines, methods for field evaluation, the implications of the transmissibility of oral polio vaccine viruses for the polio eradication initiative, and methods for optimising vaccination schedule.

I was asked by WHO to examine the issue of transmissibility of oral polio vaccine viruses back in 1996, which led to several publications on the subject, and I have remained interested in this particular issue ever since. It turns out to be of major importance today, as type 2 vaccine-derived polio viruses (VDPVs) have been reported over the past year to be circulating in several countries of Africa as well as in China and the Philippines.

2 .Why is 2019 an important year for polio eradication?

Every year has been important. Perhaps increasingly so, as the eradication target was initially set for the year 2000 and we are still several years from success.

It is important to appreciate that only a small proportion of individuals infected with polio viruses manifest clinical disease. This means that the vast majority of infections cannot be detected by clinical disease surveillance, which has posed a tremendous problem for the eradication programme. Because of this there is increasing emphasis upon environmental surveillance, which entails detection of viruses in sewage, and this is technically very difficult – like looking for a very tiny needle (not any old needle) in a haystack.

There are undoubtedly many lessons – among them is the crucial importance of maintaining public support for vaccination programmes. This has emerged as of immense importance for all public health, and the polio eradication programme in  particular, as people and political groups in several countries have refused and even actively discouraged vaccination.

At the LSHTM I lead a group that carries out epidemiological research to support polio eradication. Within the group Megan Auzenbergs is estimating the effectiveness of vaccination campaigns to raise vaccination levels within populations and prevent outbreaks, and how this varies according to factors such as the extent of routine immunisation services. Grace Macklin is a PhD student who has compared the effectiveness of different routine immunisation schedules. She is currently supporting decisions about VDPV outbreaks through mathematical modelling.

Additional questions we aim to answer is where to vaccinate once an outbreak has been confirmed, and how vaccination can be safely scaled down once regional elimination has been confirmed. This research is funded by the MRC and Bill and Melinda Gates Foundation.

2019 is the first year of the 2019-2023 global polio eradication strategic plan: Polio Endgame Strategy: Eradication, Integration, Containment and Certification. Some considerable changes to the eradication plan have been made, including the development of a new vaccine to combat VDPVs. Currently, we are struggling to halt wild polio in Pakistan and Afghanistan and VDPV continue to emerge. Successful development of this new vaccine will be a much needed tool to finish the job.

It’s an incredibly busy time to be working on polio. The transition from halting transmission to certifying eradication has brought up many challenges that require expertise from many disciplines. Did you know that examining sewage, even in London, is essential to monitor for silent transmission of the virus?

Ensuring that communities are part of the decision making process for vaccination, and enabling caregivers to make informed decisions on vaccination and healthcare is essential. Unfortunately there are too many examples in polio eradication that illustrate what can happen (reduction in coverage and outbreaks) when this breaks down.

Research Fellow in Systems Biology at LSHTM, his PhD examined the barriers to oral polio vaccine performance in low-income countries

One of the obstacles that the eradication initiative has faced since its inception is the reduced effectiveness of oral poliovirus vaccine in low-income countries. My work looks at the underlying causes of this phenomenon in the hope that this may lead to better vaccination strategies. In particular, I am interested in how exposure to viruses and other pathogens in the first few weeks of life might train the immune system to be more resistant to the polio vaccine.

We are at a key junction in the campaign to rid the world of polio. Wild poliovirus is currently restricted to a few final refuges and reaching every child in these areas with additional vaccine doses should help to halt the virus. But we are also in the midst of the phased withdrawal of the oral poliovirus vaccine, and doing this safely and successfully is a tightrope act. One of the big challenges this year has been responding to outbreaks of vaccine-derived polioviruses in the aftermath of this phased withdrawal.

Polio is an enigmatic foe. Lots of cases are asymptomatic and the virus can circulate in an area for months without being detected. The cases of paralysis we see are just the tip of the iceberg. So eradicating polio will require us not only to prevent all cases of paralysis, but also to halt this silent circulation.

Absolutely. One of the tools that we use to protect against childhood diarrhoea – the oral rotavirus vaccine – is also less effective in low-income countries. So what we learn about the oral polio vaccine may well help us to improve vaccination strategies against diarrhoea.

Professor of Paediatric Infection and Immunity and Director of the Vaccine Centre at LSHTM, Scientific Director (Theme Leader) for Vaccinology research at the MRC Unit The Gambia.

In 2014, we conducted a clinical trial at the MRC Unit in The Gambia which investigated whether inactivated polio vaccine (IPV) could potentially interfere with the immune responses to other vaccines like measles and yellow fever, if they were given at the same time to young children aged 9 months. This proved not to be the case, which was reassuring. The results are published in the Lancet.

Every year is an important year for polio eradication in my view, but in 2019 a new strategy for eradication, integration, certification and documentation was launched - the polio endgame strategy 2019-2023.

The fact that cases of vaccine-associated polio can occur in addition to wild type polio have made eradication so much more difficult. It is also important to remember that the countries that still have wild type polio are countries that have experienced prolonged conflict-disruptive for health care systems and a breeding ground for infectious diseases in the populations in general, and clearly also for polio.

Don’t politicise vaccinations and vaccination campaigns- this has caused the deaths of innocent health care workers trying to deliver a potentially life-saving intervention.