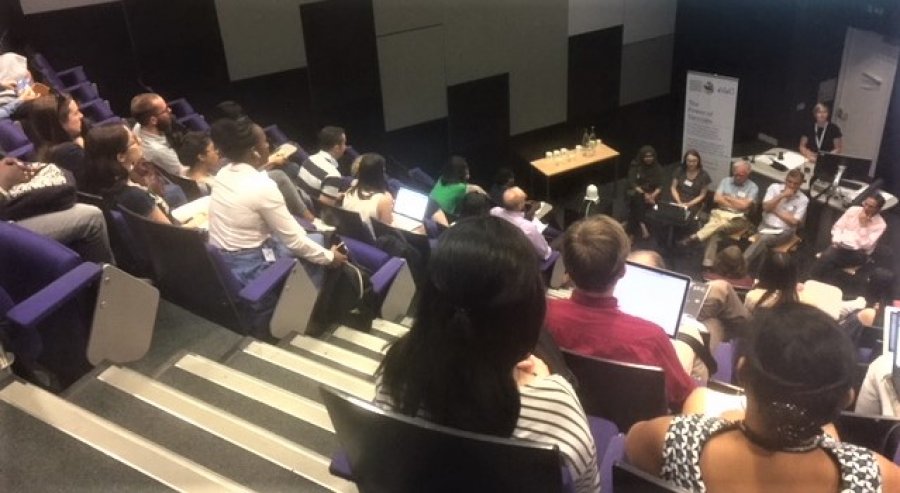 On Tuesday 2 July, a diverse panel assembled at LSHTM to discuss the process of ensuring the safety of vaccines in the UK with speakers bringing perspectives of parents, industry, the regulatory authority (Medicines and Healthcare products Regulatory Agency, MHRA) and academia. The Centre event was chaired by BBC science journalist Deborah Cohen.

The event was well attended and included many students based at the LSHTM for the annual Epidemiological evaluation of vaccines: efficacy, safety and policy short course, including many international students.

The panellists discussed their role in vaccine safety from diverse perspectives. The parent representative discussed concerns and challenges held within her community about accessing adequate and correct information about vaccine safety. As a member of the Muslim community, she also raised the challenge for Muslim parents of being sure that vaccines do not contain any non-halal products. The industry and regulator panel members talked about how their work intersects, including the way that regulatory approval is not a static, one time stage but rather is part of an ongoing process of monitoring and tracking an approved vaccine over time. The MHRA representative described the specialist testing and retesting processes of any new vaccine batch used by the regulatory authority, and the extent to which they engage at every stage of the vaccine development process. The panel also discussed the important role played by the MHRA within the European wide regulatory landscape and the broader global cooperation that takes place between medicine regulatory agencies. The European role of the MHRA now has an uncertain future in the context of Brexit.

Following presentations by the panellists there was a lively and interactive discussion with the audience. A key issue discussed was whether different preparations of vaccines should be available in high and low-income countries, where some vaccines might have a less established safety or efficacy profile but could potentially prevent many more cases and have more impact. The examples of the original rotavirus vaccine and live polio vaccine were discussed in this context.  Audience participants from several countries interacted with the panel on these issues, and it was generally felt that the same safety standards should apply, no matter where the vaccine is used.  Many participants brought the perspective of working in a developing country environment to the discussion, where overall surveillance of vaccines and drugs might be less well-established or regulatory agencies have less influence on governmental decisions.

Vaccine confidence was discussed, including whether or not panellists thought that the achievements made to date (ie eradicating small pox) could have been equally made in the current climate of hesitancy, given the spread of misinformation and the florid internet communication. Overall, the subject of decision processes driven by risk-benefit assessments was a theme of the evening.

The Vaccine Centre is keen to pick up on these themes in future events and we cherished the participation of members of the public.