Kangaroo mother care: providing the right care, at the right time, in the right place for babies born too soon 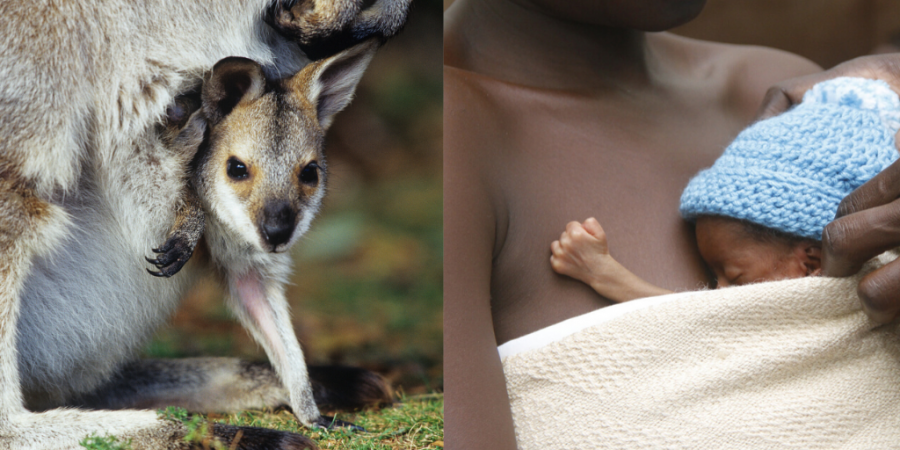 Every year on the 17th November, we celebrate World Prematurity Day in recognition of preterm births - babies born alive before 37 weeks of pregnancy are completed. This year’s theme is Born Too Soon: Providing the right care, at the right time, and in the right place.

Worldwide, nearly 15 million babies are born too soon every year. Of these, more than 1 million will die due to complications, and preterm birth is the leading cause of under-5 child death globally. In fact, 47% of under-five child deaths happen within the first 28 days of life. The statistics are bleak.

Although preterm births are a global problem, more than 80% occur in Africa and South Asia. Sadly, in these settings, preterm babies are most likely to die due to a lack of feasible, cost-effective care. With a global trend towards an increase in preterm births, now is the time for action to end inequalities in survival so that every newborn has the best chance to survive and thrive.

Kangaroo mother care is an example of a feasible and cost-effective method of care that is already making a big difference to preterm survival. The Medical Research Council Unit The Gambia at LSHTM and the MRC/UVRI & LSHTM Uganda Research Unit are testing if this type of care could be pushed one step further.

Newborn kangaroos don’t resemble the young of most other mammals. The jellybean-sized babies are underdeveloped and resemble embryos when they journey out of the birth canal into their mother’s pouch. They then suckle for around two months and eventually emerge from the pouch at six months, returning when they need to feed.  So it is rather apt that these marsupials were the inspiration for a similar preterm birth care in humans.

Kangaroo mother care (KMC) was first presented in 1978 by two scientists in Columbia as an alternative to inadequate incubator care for preterm and low birthweight newborns. Similar to the embryo-like joey’s relationship with his mother, it involves continuous skin-to-skin contact between preterm baby and mother (or alternative caregiver), with a target duration of at least 18 hours a day.

Based on robust evidence, and recommended by WHO for ‘stable’ babies weighing less than 2000g, it promotes exclusive breastfeeding and early hospital discharge, with evidence showing that when used continuously, it:

In essence, KMC meets a baby’s need for warmth, food, protection from infection, stimulation, safety, and love. The research also shows evidence of maternal benefits such as reduced postnatal anxiety and depression.

Current guidelines only recommend KMC for stable preterm babies. But what if it could help sick ones too? This is the question being examined by researchers in The Gambia and Uganda.

Dr Helen Brotherton is a Wellcome Trust Research Training Fellow, Paediatrician & Clinical Assistant Professor at LSHTM. She is PI of the eKMC trial with a small but dedicated team of research nurses, clinicians, data managers and laboratory staff based at MRC Unit, The Gambia at LSHTM (MRCG).

Early kangaroo mother care (eKMC) is a pragmatic, randomised controlled trial aiming to recruit 392 preterm neonates at a single site in The Gambia. We’re comparing standard incubator care with early initiation of KMC within the first 24 hours of hospital admission in newborns who weigh less than 2000g and are less than a day old. Studies have already shown that KMC is effective in stable newborns, our study is specifically for babies who have not fully stabilised following birth.

We aim to find out if KMC can reduce deaths over the first 28 days after birth. But we’re also interested in other wellbeing outcomes such as stability, thermal control, late onset infections, breastfeeding, and weight gain as well as collecting neonatal-maternal and environmental samples to explore mechanisms underpinning infection prevention effects of KMC.

Since May 2018 our trial has been running at the neonatal unit of the only teaching hospital in The Gambia – Edward Francis Small Teaching Hospital, where we are in desperate need of new strategies to change outcomes for newborns. Currently, one third of admitted newborns die here, and the smallest, most preterm babies are at the greatest risk of death or severe illness.

Running trials like this can be challenging and perhaps the trickiest element is recruitment. For every four babies who undergo clinical screening for eligibility, only one is recruited mostly due to severe instability, death during screening, or lack of an available and willing caregiver.

Half of all screened babies are born at a different health facility and nearly one quarter of them are born by cesarean section, usually due to maternal illness such as eclampsia. This means most mothers are not present with their baby within the first 24 hours of admission. Instead, other relatives – if present – care for mother and baby, resulting in low availability for informed consent.

Another challenge with recruitment is the lack of knowledge about continuous KMC. This is a relatively new intervention in The Gambia so many expectant mothers have not heard of it. To overcome these barriers, eKMC field workers conduct regular sensitisation activities with pregnant women and their families at surrounding antenatal clinics. The eKMC team also collaborate closely with the Gambian Government Ministry of Health and UNICEF The Gambia, as well as implementing continuous KMC at EFSTH (2017), and working towards national KMC implementation. Wider sensitization and media engagement activities are ongoing to increase the profile of prematurity and KMC within Gambian communities.

Despite these challenges, we are having success! To date, we have screened nearly 850 neonates for eligibility and recruited over 215.

Once recruited, the newborns are followed daily while the team work closely with the health facility nurses and doctors to provide standard care according to a management protocol, taking care not to introduce observation or treatment bias as the study is un-blinded. Our babies are managed in a separate area of the neonatal unit, with beds provided for the intervention arm to encourage as much KMC as possible alongside oxygen via nasal cannula, intravenous fluids, medications, and cardio-respiratory monitoring.

We have seen mothers, grandmothers, aunties, and fathers provide early KMC - the satisfaction and bonding they experience is touching to witness. However, this technique is not without challenges. It can be stressful for parents and relatives to provide KMC in a busy neonatal unit for prolonged periods. This represents a barrier to achieving the desired 18 to 20 hours of daily KMC.

Tackling this requires family support, and we encourage mothers to take short breaks, have a helper or do ‘shifts’ with visiting relatives. Peer-to-peer support is also invaluable and an ‘Alkalo’ [community leader] mother is encouraged within each group of eKMC participants.

Working with these extremely fragile and high-risk babies can be difficult both personally and professionally. Their clinical condition may rapidly change due to infection, milk aspiration, apnoea or other complications of prematurity. The nurses and doctors do a fantastic job of detecting signs of severe illness and also form close bonds with the mothers and relations, so whenever the babies become unwell or die, it is felt keenly by all of the team.

This is the reason why it is so important to conduct this clinical trial - to find feasible ways of improving hospital care for sick preterm babies and improve their chances of both surviving and thriving.

The results from eKMC clinical trial are expected late 2020. eKMC is funded by The Wellcome Trust and is registered at clinicaltrials.gov, NCT0355598.

Dr Melissa Medvedev is an Assistant Professor of Neonatology at UCSF and a Clinical Research Fellow at LSHTM. She is Co-PI of the OMWaNA (Operationalising kangaroo Mother care before stabilisation amongst low birth Weight Neonates in Africa) clinical trial, hosted at the Medical Research Council/Uganda Virus Research Institute and LSHTM Uganda Research Unit (MRCU), undertaken in collaboration with LSHTM and Makerere University.

Currently, for every 1000 live births in Uganda, 20 will die. This is 32,000 newborn deaths annually, with a majority occurring in those who are born small due to being preterm, small-for-gestational age, or both.

OMWaNA is a randomised controlled trial of more than 2000 mothers and their babies across four Ugandan government hospitals - Entebbe, Jinja, and Masaka Regional Referral Hospitals, and Iganga District Hospital. To be eligible, the babies must weigh 2000 grams or less and be less than 48 hours old. Most importantly, they will be too sick to be eligible for KMC according to current guidelines, defined as receiving one or more therapies such as oxygen.

Our aim is to find out if initiating KMC before a preterm baby has stabilised can reduce the number of deaths compared with standard care. Beyond this, we will be exploring the pathways for the intervention’s effects and understanding the cost-effectiveness of KMC compared to standard care – an essential measure for scalable and sustainable interventions in low-income settings.

In particular, we are studying the number of deaths up to seven days following birth, but we also want to know if KMC can reduce deaths up to 28 days, while also collecting data on other important outcomes like admission duration, hypothermia, infant-caregiver attachment, and maternal wellbeing.

With such a large trial, we run small pilots to understand any challenges before rolling out more widely, which can maximise our chance of success and ensure high ethical standards at all times. We have already discovered two major challenges in 2019.

First, obtaining timely informed consent is tricky given the involvement of sick newborns. KMC needs to be started as soon as possible after birth, but some women may be too ill to provide consent or participate, especially within the first 24 hours. It is already a stressful and scary time for parents, particularly in LMIC settings, where knowledge of preterm birth is generally low and complications are not always anticipated.

Secondly, although KMC is a fairly simple intervention, asking caregivers to maintain skin-to-skin contact for more than 18 hours a day is difficult and can lead to low adherence. We provide an illustrated handout and counsel them about the benefits of KMC throughout the hospital stay, but found that lack of privacy and inadequate space for beds and equipment were significant barriers.

By understanding these challenges in advance, we have been able to implement solutions.

Over the six months preceding the start of the trial, we have also made extensive efforts to expand neonatal care capacity at each hospital. We have been making infrastructure and equipment changes to ensure the safe care of all newborns, whether in the trial or not. For example, KMC areas within the neonatal units have been expanded; additional sinks, bathrooms, and office space have been installed; and medical supplies like oxygen concentrators, adjustable beds, pulse oximeters, and ventilation bags and masks were provided.

Despite these efforts, resource constraints are inevitable. Supply and medication shortages are common in these hospitals and repair of malfunctioning equipment is often delayed. While consistent power is required for incubators, radiant warmers, oxygen concentrators, and phototherapy units, the trial hospitals do occasionally experience brief power outages. To understand the scale of the problem, we’ll be surveying staff every 4 months over the course of the trial to capture data as part of the process evaluation.

With rates of preterm birth rising or stagnant across the globe, finding ways to improve survival and reduce disability in preterm babies in the highest risk settings is a growing imperative. OMWaNA is striving to find out if KMC can benefit this vulnerable population. Trial results are expected in mid-2022.

The OMWaNA trial is funded by the Joint Global Health Trials scheme of the Medical Research Council, Wellcome Trust, Department for International Development, and Department of Health and Social Care. Trial results are expected in mid-2022 and more information can be found at clinicaltrials.gov, NCT02811432.