A Cinematic Lens on Child Well-being: Dr Robin Basu Roy’s Bringing a Collision of Arts and Health to LSHTM

London School of Hygiene & Tropical Medicine London School of Hygiene & Tropical Medicine https://lshtm.ac.uk/themes/custom/lshtm/images/lshtm-logo-black.png
Dr Robin Basu Roy is fairly new to LSHTM, having started in March 2019, but he’s already making an impact with a fresh approach to discussing child health and has organised film screenings at LSHTM this summer. Recently, he was awarded a scholarship to spend a week working on Ingmar Bergman’s estate to further his creative work. I caught up with him to find out more. 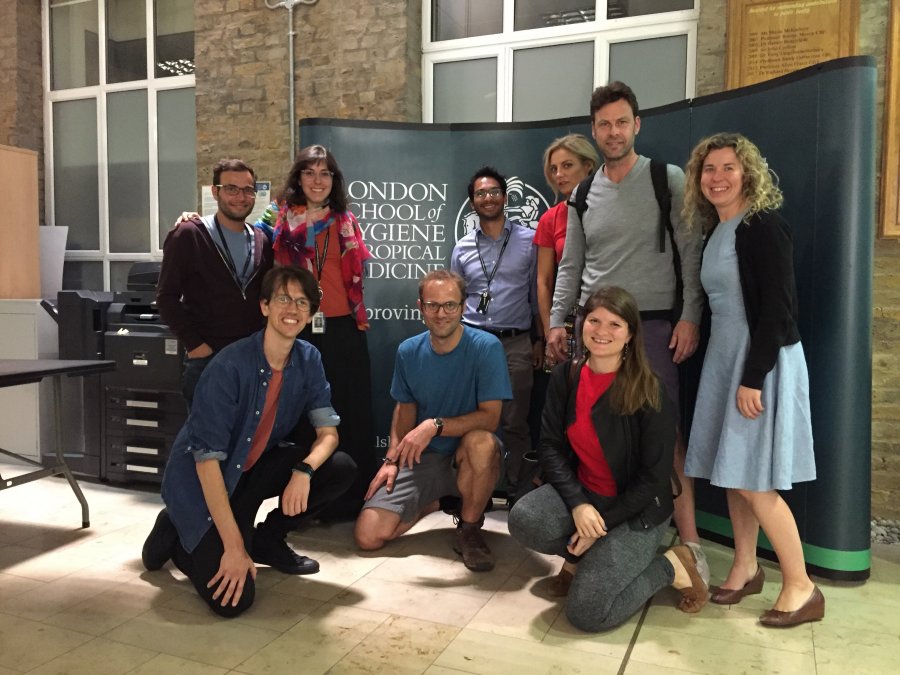 By day, Robin’s a paediatrician who spends 50% of his time conducting research into paediatric tuberculosis. But by night he turns into a cineaste with a passion for sharing great films.

“I like anything that makes you think and promotes the sort of conversations that don’t normally crop up in everyday life. I think there’s something really special you can get from music or film or any of the creative arts that we lack in our daily clinical or academic lives.”

But it wasn’t until after years of being a Junior Doctor, whilst working in Barnet Hospital in North London, that he realised a connection between his hobby and career.

“I was watching a film on a plane and it made me think about all sorts of things, like: When should the State intervene in families? Is love enough? How do we decide what is suitable environment for a child to be brought up in?

So upon my return, I just got a bunch of paediatric and mental health colleagues together and we used to watch a film about childhood once a month and have a chat about the issues.”

A tenacious and determined young researcher, Robin decided to broaden his vision for the film club. And when Northern Irish director, Mark Cousins, released his documentary “A Story of Children and Film”, Robin got in touch with the film-makers and arranged a series of public screenings of “Cinema of Childhood” movies followed by panel discussions. That was back in 2014, and since then Robin has held more than 20 of these events.

Robin has two rules for his screening events. Firstly, it has to be an amazing film so that it’s good use of people’s valuable time. And secondly, the panel always has to include representation from both the film and health worlds.

When I probe him as to why the arts representation is so important, he instantly leaps in with a passionate advocacy for his approach.

“It would be very easy to get a group of health people to discuss films. But then we would lose sight of how and why the films are so moving to us.

We’d lose the opportunity to learn something from the arts side and just keep banging on about the same old topics to the same old people.  We all know in a theoretical sense that war is evil, prejudice unjust, that child neglect is a tragedy for instance, but how do we break out of our silos and feelit?”

I’ve learned so much about how and why people are moved from talking to film experts – it’s a chance to truly engage with other disciplines and think about things from a new perspective.”

Films and Conversations that Speak to Social Truths

A true passion for film shone through when we spoke about Robin’s most memorable moment from the events. Speaking about a screening of ‘Ivan’s Childhood’ by Tarkovsky, he mentions the “mindblowing dexterity with light, the use of dream as a narrative device, the stunning set-pieces that stick in your mind” and how it set the tone by, “leaving us dazed and astounded by this incredible debut piece of art that spoke to a social truth in a way I’ve never experienced before.”

The film is Tarkovsky’s first work of art as film-maker and tells the tale of a Russian boy soldier, operating as a scout on the banks of a river that forms the front line between the German and the Russian forces. It makes sense then,that the panel was made up of a Russian film expert, a World War Two historian, and someone from the Children & War Foundation

“It was a beautiful, fluent discussion and I would challenge anyone in that audience to come away without learning something new. We learned about what defines Tarkovsky as a film-maker, about the history of creativity and arts in the Soviet era, about patriotism and loyalty to the state, the history of World War Two.

And we recognised that children are still suffering – either through being direct actors or victims in the war or through being orphaned, which we discussed within the context of societal disintegration which accompanies conflict.”

The events are set up to enable hard-hitting topics like this emerge as natural, dynamic free-flowing conversation. And not only have they inspired Robin, but they’ve also played a part in his career.

“It’s great to get some concrete academic output and spread the word in a way that stretches beyond the audience that can make it to a particular screening”.

But how on earth does he get time for all this alongside a busy academic and clinical career?

“There isn’t really any time or funding to use film to think about childhood so I’ve always just scrabbled it together here and there. So I applied to something called the Bergman Residency. And out of a whole stack of applications, I guess someone felt like this deserved a bit of time, space, and nurturing to try and foster it beyond its current stages.”

Ingmar Bergman was a Swedish director, writer, and producer who worked in film, television, theatre and radio. He lived and worked on the island of Fårö for over 40 years. Following his death, he imagined his home continuing to be a meeting place for people who work with music, film, photography, theater, and literature. Now, The Bergman Estate on Fårö invites artists as well as scholars, non-fiction writers, and journalists from all over the world to come and work.

Robin heard about the residency through a friend who works at Uppsala University, which has a connection to the Bergman Estate.

“I thought: How come I’m super excited about film and child health, and I haven’t even heard about it?!”

Applications are online and involve two simple steps – explaining what your project is and how you’ll provide cultural compensation to the community of the island. And of course – part of Robin’s compensation is to propose one of his film screenings.

“This is an example of how beautiful the world sometimes is and how many opportunities there actually are if only we all knew about them. Which is why I would really encourage more people who have some form of connection to the arts to look into this and apply!”

If it’s an unusual image for a paediatrician with an interest in infectious diseases to be taking a week of deep creative thinking on a remote island, the journey there sounds even more unusual. Two flights, a drive across one island, and a ferry, then a meeting with the Bergman Estate housekeeper at theChurch of the Island, and a long drive down tiny side roads through a forest.

Residents have full access to the estate Monday – Friday, “…and it’s truly amazing, each morning you wake up and think, hmm.. where am I going to work today? Shall I work in his library? Or the room where he watched films? Am I going to sit in his kitchen? Maybe I’ll work in the meditation room?”

Robin describes the work environment with genuine awe, speaking of crisp pine interiors, Nordic architecture that blends into the landscape, and views over the Baltic Sea wherever you are. All whilst sitting surrounded by Bergman’s book, VHS, and record collections all arranged exactly as it was in his lifetime.

“Essentially you feel two things – first is massive imposter syndrome and second, genuine inspiration and liberation through being in such a calm, peaceful, contemplative place.

So the words just kind of poured onto the page and they were inspired by the people who were there at the same time and the conversations we had.”

During his stay, Robin was accompanied by assorted Professors of Film Studies, Colombian writers and photographers, and a New York artist preparing her exhibition for Bergman Week.

“And we had so many conversations about amazing films about childhood, about how film can be “used” for health purposes, and that was only possible because of that constellation of people coming together in that place and that time.”

‘It Takes all Sorts’

Although Robin is a huge fan of Bergman’s artistic work and outputs, he recognises the dark undertones to his personality.

“His work is really miserable and nihilistic. As a generally bubbly, positive, paediatrician type, I find it fascinating and truly distinct but also quite full on. I guess it takes all sorts”.

On recounting some of his unexpected learnings while he was there, Robin talks of learning about Berman’s creative inspiration and an article called, ‘The Snakeskin’ – highly cited as Bergman’s greatest essay and description of his artistic motivation.

“From the title, I presumed it was going to be an essay about the power of the arts and creativity – about being a snake, and as it grows it gets constrained by its old shell, and needs to break free to make something new.”

But he couldn’t have been more wrong. Bergman’s Snakeskin Essayis actually, “…a damning reflection of the arts as corrupt, self-referential, and why it serves no true purpose in the modern day.” Robin explains, “He says that art is ‘a snakeskin full of ants.

The snake itself is long since dead, eaten out from within, deprived of its poison; but the skin moves, filled with busy life.’”

But despite this bleak outlook, Robin marvels on Bergman’s ability to maintain an incredible creative energy and remarkable outputs.

So does Robin think Bergman would approve of the way he’s using film?

“He seemed to take a pretty harsh philosophical perspective on many things so I don’t know if I’d want to hear his thoughts!

But one of the reasons I was recommended to read the article was to look at film as a stimulant for conversation. Which raises the notion of film as a secular communion, the coming together of people to think about the issues that are raised.

And Bergman used to hold screenings for people on the island. His daughter talks about how it’s one of the few ways into his life and his circle of intimacy was to watch a film together and discuss the content.

So I guess the use of film to start conversations is something he would approve of.”

Bergman and the Lancet – an Unusual Pairing

Robin’s time on the Island enabled him to take the time to write his Lancet Child & Adolescent Health article, and it’s clear this was influenced by Bergman.

“A lot of the references to Bergman were a direct product of my time there.

I’ve also sketched out an article on the Tarkovsky film I mentioned, that I’ll be writing with a child psychotherapist. And again, I used the primary resources from Bergman’s library about Tarkovsky to build that up.”

Finally, I asked Robin to sum up his experience in 5 words, which feel very fitting to our conversation, “Inspiration, meaningful interdisciplinarity, creativity, opportunity, and an immense privilege.”

You can find out more about Robin’s work by visiting his website https://watchtalkthink.com/or by attending one of the events.