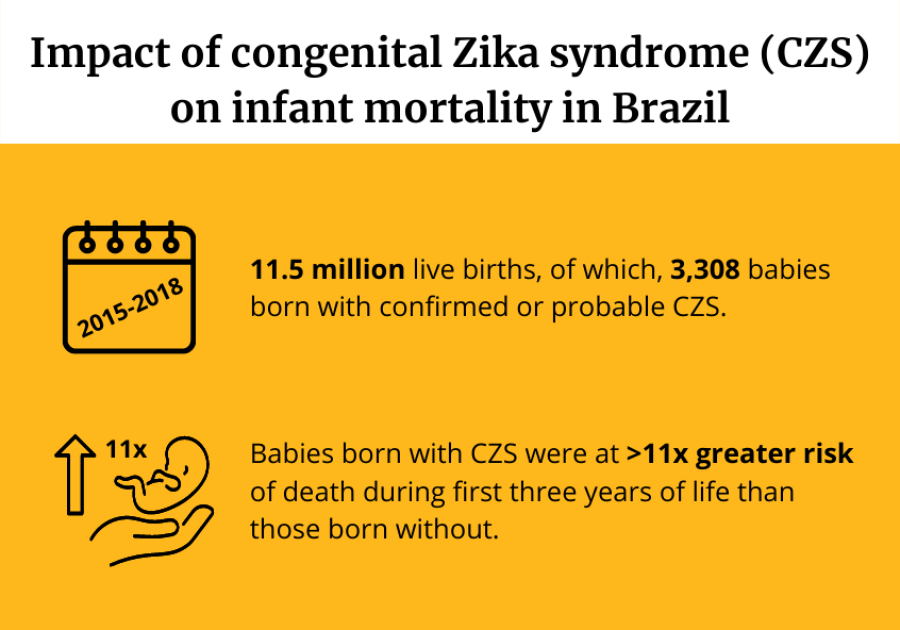 Babies born with congenital Zika syndrome (CZS), due to infection with the Zika virus during pregnancy, are at more than 11x greater risk of dying during the first three years of life than those born without the syndrome, according to a new study published in The New England Journal of Medicine.

The study was carried out by a joint team from the London School of Hygiene & Tropical Medicine (LSHTM), the Center of Data and Knowledge Integration for Health (CIDAS-Fiocruz) and the Federal University of Bahia (UFBA), funded by Wellcome and the Brazilian Ministry of Health.

Normally babies who are born prematurely or small are at greater risk of death. In contrast, in babies born with CZS, the highest risk was found to be for children who were carried to full term or at normal birth weight (over 5.5lbs) – 14.3x higher and 12.9x higher than babies in that group born without CZS, respectively.

The main causes of death amongst babies born with CZS were infectious diseases, diseases of the nervous systems, and congenital abnormalities – mainly sepsis, cerebral palsy and microcephaly, respectively.

Dr Enny Paixao Cruz, Assistant Professor at LSHTM and Research Associate at CIDACS, and study first author, said: “Many may think Zika is a disease of the past, but in just November this year there was an outbreak of the virus in the Indian city of Kanpur, with a surge of nearly 100 cases. For the most vulnerable in our society and parents, it remains a global concern.

“While the overall risk of death remains small, we found babies born with congenital Zika syndrome are at a greater risk of death than those born without. This increased risk demonstrates the importance of protecting women, especially those pregnant or of child-bearing age, against the bite of the mosquitoes that carry this virus.”

Zika virus is transmitted through the bite of the Aedes aegypti mosquito. For many it is harmless with no symptoms, but if transmitted from mother to baby via the placenta it can result in babies being born with conditions including microcephaly, other congenital abnormalities, and dysphagia.

In April 2015 until November 2016, Brazil was affected by a devastating Zika epidemic, with an estimated 1.5 million infected, and over 3,500 cases of infant microcephaly or congenital zika syndrome – a rare condition where the head of the baby is smaller than expected, which is often linked to underdeveloped brains and learning disabilities in later life.

While we know prenatal exposure to the Zika virus can impact fetal development and result in CZS, there is much less data on survival and long-term outcomes of children born with CZS compared to those born without, and what impact important predictors of child mortality risk, such as birthweight and gestational age at birth, can have on these outcomes.

To plug this hugely important knowledge gap, the researchers looked at over 11 million babies born in Brazil between 2015 and 2018. They explored the association between mortality rates and CZS, using data from public health, live birth and death records.

These records should cover all cases of CZS, as Brazil requires all babies presenting with CZS-associated symptoms, born with microcephaly or other central nervous system symptoms, or whose mother reported a fever or skin rash during pregnancy, to be reported and investigated as suspected cases.

The team looked at babies of varying birth weights, gestational age at birth (preterm or born to term) and size for gestational age, comparing the mortality risk of those babies born with the syndrome to their counterparts without CZS.

Similar mortality risk was observed for babies born with or without CZS if born preterm (before 32 weeks gestation) or low birth weight. Mortality in very small preterm babies without CZS  is very high , much higher than in term, catching up with mortality in CZS babies.

Prof Maria Gloria Teixeira, Epidemiologist at UFBa and CIDACS and senior author of the paper, said: “The increased mortality risk of live births with Congenital Zika Syndrome than those without this syndrome highlights the need to develop and implement postnatal medical care protocols, including early interventions, which can help reduce sequelae and adverse effects and improve the survival of these children.”

The researchers found no statistically significant difference between mortality risk for babies born with or without microcephaly, suggesting it carries no added risk for the baby. However, this could be because the study did not have power to observe this difference. Therefore it still needs to be better investigated.

Additionally, the time at which the mother reports having a rash (a common symptom of Zika virus infection), or if she had a rash or not, did not seem to alter their child’s mortality risk.

Dr Paixao Cruz added: “While parents should note that the overall risk of death remains small, our work highlights the need for women to be protected against the virus, and for well-established postnatal care systems. Early interventions after a baby is born with congenital Zika syndrome could reduce the long-lasting health effects, and improve survival chances. Now that we have identified which babies are likely at higher risk, we need to establish postnatal care and treatments to give them the best chance at life.”

The researchers acknowledge the limitations of this study, including the small number of babies with CZS. Cases could have been underreported due to a lack of specific diagnostic tests for Zika infection in Brazil at the start of the pandemic.

Prof Mauricio Barreto, Director of CIDACS and co-senior author of the study, said: “We are very proud of this study as an addition to the effort to demonstrate the power of Brazilian routine health data, very judiciously processed in CIDACS, to produce sound scientific knowledge around critical health issues, with a high level of generalizability and applicability, and for immediate use by decision-makers.”