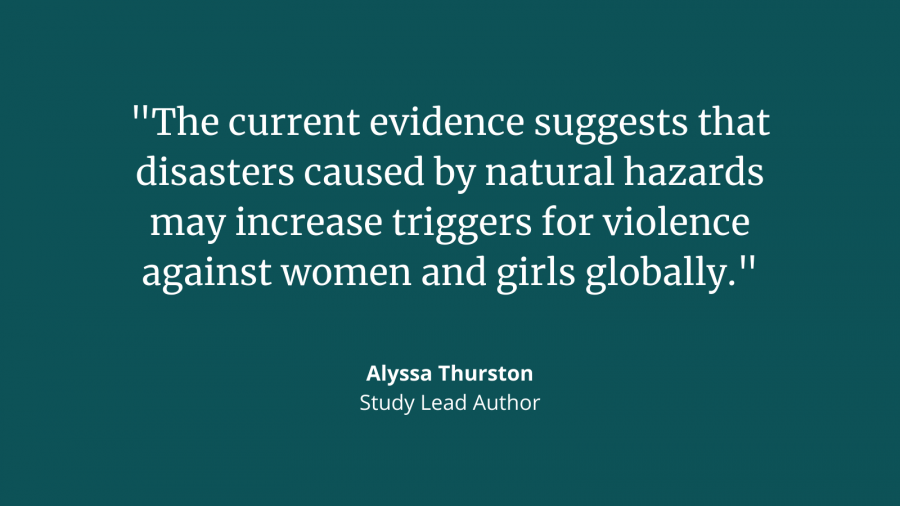 Disasters caused by natural hazards may increase the triggers for violence against women and girls (VAWG) by boosting the means, opportunity, and underlying drivers of violent behaviour, according to a new study published in BMJ Global Health.

The research was led by the London School of Hygiene & Tropical Medicine (LSHTM). It is the first known global systematic review of the impact of natural disasters on women’s and girls’ risk of violence. The team included all published evidence, looking at the association between disasters caused by natural hazards like droughts, floods, and hurricanes, and VAWG.

Eight of the 20 quantitative studies included found that natural disasters were associated with increased physical, psychological, and sexual violence against women and girls, and four others found positive associations with particular types of violence. The 16 qualitative studies and the one mixed method study all described violence against women and girls in the wake of natural disasters, with studies describing the possible reasons behind the observed association.

Three main possible triggers emerged: an increase in stressors that spark violence, such as trauma, mental health issues, financial insecurity; an increase in enabling environments, such as absence of policing, health and support services, breakdown of family structures and social isolation; worsening of existing drivers, such as gender and social inequalities, lack of female representation and inclusion.

Alyssa Thurston from LSHTM and study lead author said: “Despite the international commitments on mainstreaming gender in disaster risk reduction and climate adaptation, the current evidence suggests that disasters caused by natural hazards may increase triggers for violence against women and girls globally. We see this occurring in post-disaster settings across high, middle and low income countries that differ on various dimensions – not just in certain settings or specific disasters.

“With the changing patterns of climate related disasters and the increasing number of people affected by disasters, understanding and preventing violence against women and girls must be a global priority.”

Sparked by climate change and heightened societal vulnerabilities, disasters caused by natural hazards have increased in frequency, severity, and duration worldwide. Over the past two decades, 7,348 disasters precipitated by natural hazards were recorded—nearly double the number recorded between 1980 and 1999. And between 2008 and 2017, most (84%) of all recorded disasters were related to climate issues.

Meghna Ranganathan from LSHTM and co-lead author said: “It is increasingly acknowledged that women and girls are key advocates and actors in disaster risk reduction and climate adaptation. Initiatives targeting women’s empowerment will not only serve to prevent violence but also potentially strengthen societies’ defences against disasters and climate change.

“Future research should also look at the broader implications of climate change and extreme weather events on violence against women and girls, recognising that climate change impacts population and segments of societies in very different ways.”

The authors acknowledge limitations of the study including the lack of high quality, rigorously designed studies and the shortcomings of exposure and outcome measures used in the included studies.